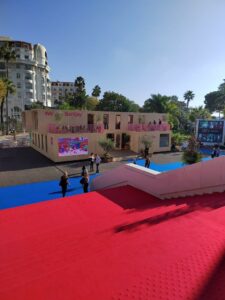 From October 17 to 20, a unique wooden structure made of NOVATOP panels stood in the French city of Cannes, directly under the stairs of the famous Festival Palace, which is the main venue of the famous International Film Festival. Banijay, a company that creates and distributes content for television and multimedia platforms worldwide, chose this material for its exhibition at the MIPCOM festival. The sustainable building based on the design by architect Nicola Spinetto was built by the implementation company in four days.

The pavilion as a demonstration of sustainability

The exhibition pavilion of modern times is not only used to present the exhibitor, but, above all, it represents the company as such. “This groundbreaking, eco-friendly project demonstrates Benijay’s commitment to sustainability and declares our mission to reduce our carbon footprint and overall environmental impact,” says Cathy Payne, CEO of Banijay Rights, Banijay’s global distribution subsidiary. The NOVATOP system was the ideal choice due to its stability, versatility of use, but also sustainability. Undoubtedly, the exceptional quality of the surfaces, which remained fully visible in the interior and exterior, thus creating a natural oasis in the city scented with wood, was the greatest added value. Acoustic panels of the same brand were installed inside, thanks to which very comfortable room acoustics were achieved even in such a busy and open space.

Build, dismantle, carry away and use again 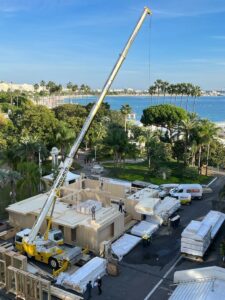 The specifics of the structure and production are; since it was not a permanent structure, but an exhibition pavilion, which the Benijay company needed not only to build in four days, but also to disassemble, carry away and transport to the next destination without damage after the end of the exhibition. ORATI, the general contractor, and Nicola SPINETTO Architectes left nothing to chance and first built an experimental building from NOVATOP called Giverny, thanks to which they convinced the client that it would definitely work. And the manufacturer also showed ingenuity when they had to deal with several specific details, based precisely on the necessity of repeated assembly and disassembly and the visual quality of the structure from both sides, which is something quite exceptional for an outdoor installation. Firestop surface finish was addressed in advance in cooperation with a French company.

A material with enormous potential

„I was genuinely surprised by the implementation of the pavilion in Cannes. Due to the volume of orders, I do not have a perfect overview of each of them, and this one was also kept secret by the contracting party until the last moment. There were no problems during the preparation and production process; everyone in our team did a great job, for which I owe them a great debt of gratitude. And the result? I’m excited. It proves that NOVATOP is perceived as a symbol of sustainable construction, which also has great design potential: they put it on the red carpet and world celebrities take pictures in front of it. It can’t possibly be manifested more symbolically,” smiles Ing. Jiří Oslizlo, Chairman of the Board of Directors of AGROP NOVA, which produces NOVATOP.

Are you looking for technical information?

Do you need help with the selection?

We are here for you.

This website uses cookies
We use cookies to personalise content and ads, to provide social media features and to analyse our traffic. We also share information about your use of our site with our social media, advertising and analytics partners who may combine it with other information that you’ve provided to them or that they’ve collected from your use of their services.
Manage options Manage services Manage vendors Read more about these purposes
Show settings
{title} {title} {title}